Once more under the knife, dear friends...

I have managed to tear the meniscus in the same knee where I had ACL surgery two years ago. Surgery on May 10th, grumbling already in progress. :) Fortunately the recovery trajectory for this surgery is much better, if all goes well I should be back to normal activity by the end of June.

I'm coming off a truly brutal couple of months at work, so there's really very little to report in my life.  On the other hand: Heterodyne Halloween costumes! 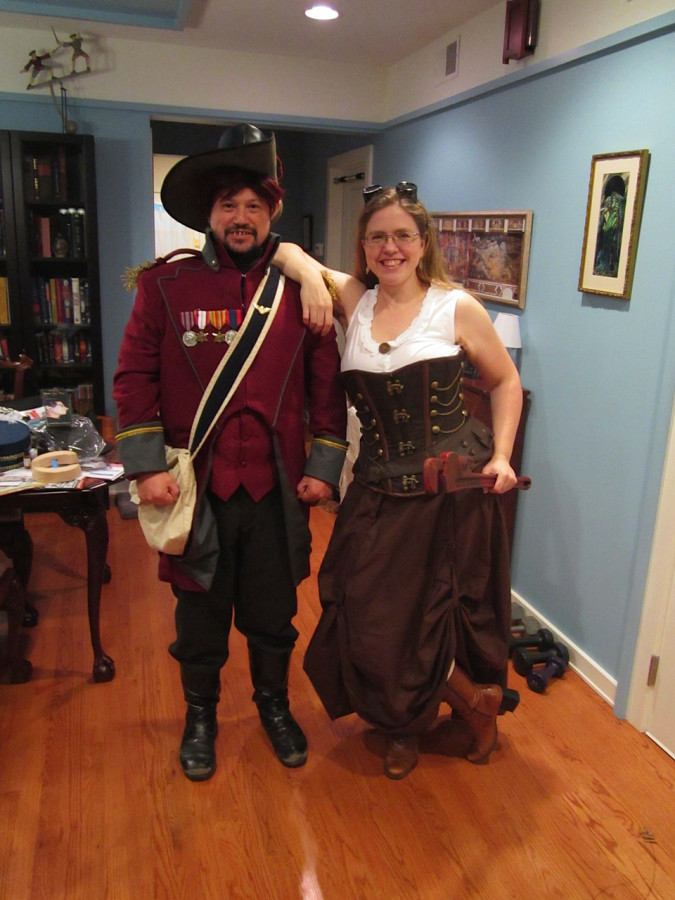 Happy birthday to the best monkey ever!

Rick and I will be in Virginia for the week around Thanksgiving and in Boston for the week before Christmas. Would anyone like to hang out?

This is a very interesting visualization of radiation, both from manmade as well as natural sources.  Note that this was done by a layman, and he makes no assertions about it being perfectly accurate.

Thundersnow!  "Isolated snow-producing thunderstorms are expected to develop tonight. "It is not uncommon to see snowfall rates in excess of 4 inches per hour in thundersnow, making travel nearly impossible," the weather service warned this morning."

The weather prognosticators have all sold their houses, gathered up the children, and are running down the street screaming, "The End Is Nigh!"  Everyone else is shrugging and getting on with their lives.  I'm curious to see what this will be like - I was out of town the last time we had a snowstorm this bad, ten years ago.  I'm also very curious to see the snowplows that they will be attaching to the fronts of the trains (no kidding!)

To my chagrin, I had to go to the grocery store last night, since I'd been lazy over the weekend before snowpocalypse was predicted.  Despite reports from friends about chaos and anarchy at their local grocery stores, mine was thankfully quiet.  Granted, it was clear that the ravening hordes had descended earlier in the evening.  Fruit and veg (at least the common sorts) were pretty well picked over, although I was able to load up on some nice kale, mustard greens, eggplant, and whole pineapple.  Bottled water was all gone (natch), as was ground hamburger meat.  Bread flour was completely gone, although they still had plenty of all-purpose. (Weird.  Maybe they just ran out for non-blizzard reasons?)  And every brand of flavored greek yogurt was completely gone.  (???)

I've heard snowpocalypse, snowmageddon, blizzaster, but my favorite so far is snOMG.

As of today, both the Illinois House and Senate have approved a bill for legalization of same-sex civil unions.  The governor is expected to sign it quickly.

There's an interesting debate evolving among my facebook friends.  There seems to be roughly the same number of people who are excited that we will have same-sex civil unions, as there are those who are angry that we don't have same-sex marriage.

I feel like we should celebrate this progress.  I have to admit I'm a little surprised & saddened by how quickly people got upset by this (in a way I didn't expect - obviously I'm expecting far right "defense of marriage" types to get upset pretty quickly).  Obviously marriage would be better than civil unions, but alimony and visitation rights and nursing home cohabitation and all the other legal benefits of civil unions are so freaking wonderful, are such damn good news, I feel like we should have at least a moment of celebration before we get to work on the next step.

We were traveling this weekend, our first flights since the new security measures were implemented.  I was reluctant to step into a backscatter radiation box, not so much because I care if I'm getting ogled by a remote TSA agent, as I care that I'm stepping into a radiation box that the manufacturers assure me is Perfectly Safe.  I've received more than my fair share of radiation in my life, and I'd rather not add to my total any more than I need to.

In Airport 1, we politely requested a patdown.  We were directed to walk through a metal detector and then wait for the next available patdown agent, which only took a couple minutes (it was a pretty quiet day at the airport, though.)  We both got trainees (mine even made a mistake and had to go back to an earlier part of the patdown.)  They used a show-and-go kind of approach, e.g. "I'm going to feel the inside of your waistband now," while making eye contact with me to ensure I'd understood, before actually feeling the inside of my waistband.  They used the backs of their hands on any sensitive bits.  There was no groping or violation involved - the whole thing was very friendly, very non-threatening, I would have no problem doing it again (or even having my kid do it, if I had a kid.)  After the pat-down was over, they ran a chemically treated swab over their rubber gloves and ran it through a scanner, presumably to see if there was any bomb chemical residue on my clothing.  The light was green, the traveler was clean, and off we went on our merry way.

In Airport 2, the line we got in had a backscatter radiation box, but it was shut off and they had us walk through a metal detector instead.  So no real data there.  By that point, though, I wonder if they were so worried about the backlash and just decided not to bother with backscatter scanning during the holiday - I didn't think to check if the other lines were also using metal detectors until after we'd left the area.

So, that was our experience, FWIW.

"Little, Big" by John Crowley.  This book just made me more and more frustrated the longer I read.  It's an interesting world with lovely writing, but it's populated by 2-dimensional archetypes and no plot.  I doggedly kept reading because (A) the world was cool and (B) something had to happen, sooner or later.  Right?  About 500 pages into it, when I had already suppressed the urge to throw it across the room half a dozen times, one of the "characters" is writing for a soap opera and is thinking about about how interesting the soap opera is as a structure, because it just keeps going on and on and never ends and never comes to any kind of resolution and I thought "if you are actually talking about this book I will KILL YOU DEAD."  Finally, FINALLY, something happened on page 700?  or thereabouts?  and took approximately 30 seconds to read.  And then the book was over.  I set the book down and thought "it took you 700 pages of maundering to get to THAT?  THEY ALL TURN  INTO FAIRIES????  Really??????   Oh, and PS, why did you kill the only character I cared about even a little?   That was unnecessary on so many levels!  You're just trying to make me care about the ending of this awful book!  But it's not going to work!  Your book is still terrible!"    I cannot believe this book won the world fantasy award.  Although, upon reflection, I can believe it.  I'm sure it was the same bunch of yahoos who gave the award to Mythago Wood, which was infuriatingly awful in much the same way.     Oh, John Crowley.  I shan't be reading any more books by you.  Not one more.  And when I get home tonight I'm going to throw out any books of yours that are sitting unread on my shelf.

When Zingerman's says they'll send me bacon in 5 to 7 business days, apparantly what they mean is that their honor demands that I not be without bacon for more than 24 hours.  Yesterday afternoon I thought, "we are almost out of bacon."  This morning I am blessed with an abundance.